Full Pluralsight for only $199? Nuts!

Pluralsight is normally $299 a year. Since I’m a sucker for a deal I thought I’d share this one with you:

Until June 19th, you can get the entire Pluralight course library for 33% off.

Not only do you get full access to the thousands and thousands of courses, you get:

This is a super duper deal.

Let’s compare this $199 for a year of full access to courses of some of the most amazing tech teachers to:..

A coding bootcamp.  Average price in the U.S. is $11,906 (according to Google). You could actually get the full price of Pluralsight ($299/year) for about 40 YEARS for that price.  Now, most of the time you go through the bootcamp and they prep you for a developer job, and help you land it. I don’t have a problem with that. But it is a little pricey.

A used textbook on how to program in C++. This is $111.99. Used. A textbook. Anyone ever pay for text books in college? Bleh. What a farce. For the price of one or two textbooks that are usually useless, you could get a full year of access to almost (or more than?) 7,000 courses taught be people who, in some cases, have actually written the book on their specialty.  I’m sure that textbook’s price is subject to change… but it is still ridiculous.

Attending a professional conference. Let’s say you go to a conference this year, at the early bird price of $599 (give or take a few hundred). Add on flight, hotel, food… you are now easily up to $3,000 (give or take a couple thousand). I’m sure you will get value out of the few days and sessions at the conference… but with a Pluralsight course for less than 10% of that cost you get value ALL YEAR.

The cost of doing nothing. Let’s say that if you were take a few Pluralsight courses, and get smarter in [security, databases, design, graphics, UX, a plethora of programming, and my favorite: professional development and soft skills :p], let’s just say that your new learning leads you to earning ONE dollar per hour more in your company. That is worth about $2,080 PER YEAR. Pretty good investment. Look, your learning didn’t stop when you graduated. Every bit of your job is likely being computerized… don’t you think you should understand more tech?

A college degree. Okay, let’s go the hear of job security (cough cough). A degree in computer science. I’m not even going to put money into this one – you can figure that out on your own (it’s likely at least $3,000/year for four or five years… which is super low). Let’s just talk about TIME. You spend four or five years going to school to be in classes where they are not using current versions of languages, so by the time you graduate you might not have seen or used the languages at the companies that hire you. Been there, done that. And you spent four years in archaic language. Sounds expensive to me.

That was fun. I could go on. But I don’t need to. You get the point.

Look, this is just a little more than a netflix subscription. But with Pluralsight, you could walk into an entirely different career.

Treat yourself. Get this $100 off deal. And then put the time and effort into learning. You can thank me later. 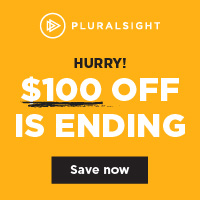 
Comments Off on Full Pluralsight for only $199? Nuts!